Amid all of the noise in the run up to last week’s General Election, readers may have spotted the a new CBI report ‘Don’t Wait, Innovate’ which called on government to spur a national R&D movement to capitalise on areas of existing and burgeoning strength by establishing a series of new ‘Catapult Quarters’ throughout the country.

A look at the HVM Catapult’s Annual Review, published last week and charting its activity and impacts through 2018/19 makes the reason for the CBI’s interest in the Catapult model all too plain. As CEO, Dick Elsy, comments in his introduction to the review, there is “clear evidence that we are delivering overwhelmingly positive impacts that often flow far from the manufacturing sector”.  He’s absolutely right.  As the review reports, the Catapult’s benefits include not only significant GVA impacts – independent evaluation suggests the HVM Catapult’s work will deliver nearly £16bn of GVA into the UK economy over the next 10 years from its 20 most substantial interventions alone – but also a host of wider benefits from attracting high value inward investment projects to helping companies reduce their impact on our environment. 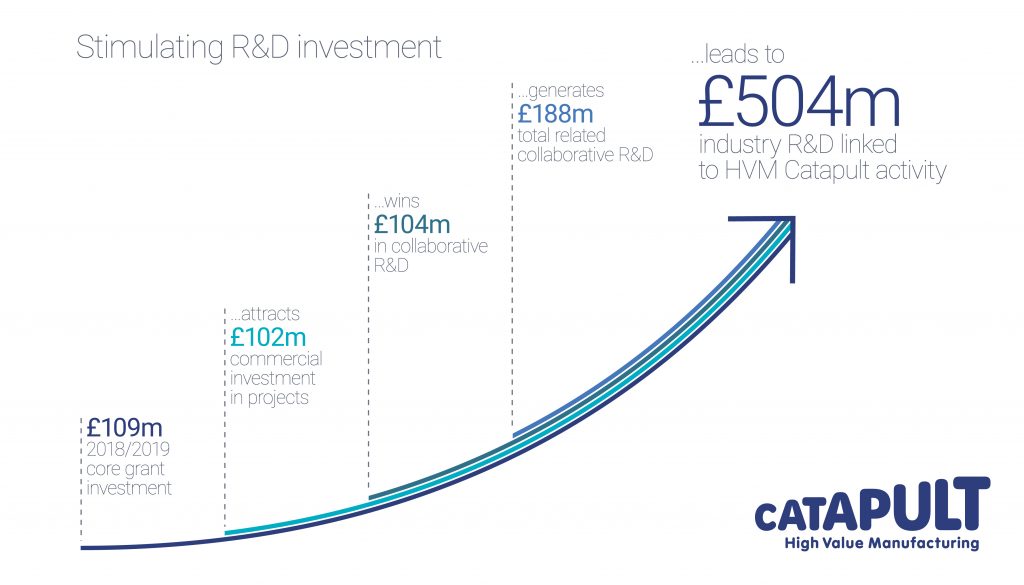 In total, the Catapult worked on some 4,650 projects with companies across the UK.  As you’d expect, the review makes frequent mention of projects with globally recognised businesses at the top of major supply chains, but over half of the Catapult’s projects were with smaller businesses – the sorts of firms that are the lifeblood of British manufacturing and the engines of community prosperity.  Companies like Harris RCS in Coventry, a family-owned precision aerospace supplier which, thanks to its work with the Catapult saw orders increase by 10% and made double-digit productivity gains or like Scotland’s Bravest Manufacturing Company – a social enterprise set up to provide quality jobs for armed forces veterans which produces signage for some of the UK’s biggest buyers. When the company needed to find a new home it tapped into the Catapult’s Advanced Forming Research Centre (AFRC) in Strathclyde to help plan and get is new factory up and running. The AFRC was able to use visualisation technology to demonstrate how the factory would look prior to its opening and it helped train the company’s team on the new technologies that will allow it to expand their service range.

The breadth of the Catapult’s activity, its sectoral reach and the range of technologies at its fingertips is breath-taking.  Yes, the Annual Review document includes stories from the traditional pillars of manufacturing in aerospace and the automotive sector, but it’s clear that the HVM Catapult’s scope goes much wider with reports of work to advance treatments for rare cancers, action to improve construction practice, even projects to bring the robotics revolution to farming.

In every page of the Annual Review, there’s a strong sense of the Catapult’s absolute determination to help manufacturers not only strengthen their bottom lines, but also to tackle the principal challenges of the day.  Perhaps the best examples of this come through in a myriad of stories that describe how the Catapult’s seven centres have been helping companies of all shapes and sizes reduce their environmental impacts by saving the amount of waste going to landfill, reducing energy consumption, driving carbon emissions, and even  projects that are helping to tackle the scourge of plastics pollution through the production of bioplastics.

It’s heady and inspiring stuff. At its core is a very simple philosophy: if we can help UK manufacturers harness the potential of new technology, they will thrive supporting the prosperity of communities across the country. With 10% of UK GVA and 45% of our exports coming from manufacturing, it matters that we succeed. The HVM Catapult’s Annual Review document, gives confidence that we will.

You can read it here.